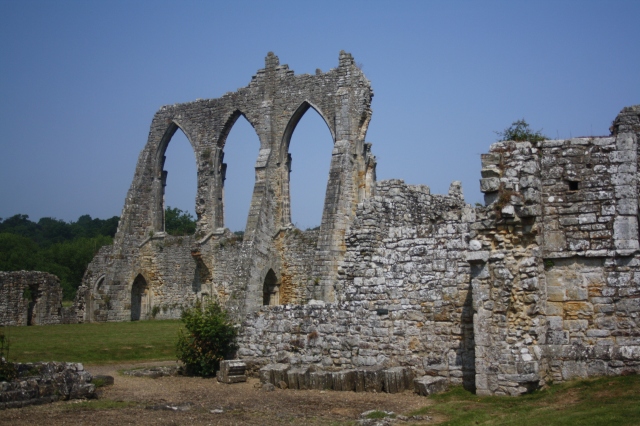 General view of the Abbey

It features briefly on TV4 so I was told and when you walk its greensward and gaze at the ruins you stroll from Kent into Sussex and back again.   Old Bayham Abbey ruins are impressive and on a sunny day you catch the highlights of the local stone from which much of it was built.

The Abbey is reached from Lamberhurst on the road to Frant – or you could go from Frant but that means driving through Tunbridge Wells.   From Sheppey the easiest route is through Hollingbourne and Leeds and take your own route to Goudhurst to cross the A21 into Lamberhurst.

The Abbey ruins are stunning set in the wooded farmlands overlooked by Bayham Abbey House known also, so it seems, as Bayham Hall.  The Abbey is in Sussex – the Hall is in Kent, a sort of straddling the border although from the style of the buildings you could suggest that the influence was of Kent.  The stone for the Abbey comes from the Tunbridge Wells area and one can assume that the Hall is of local stone too. 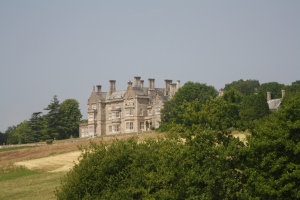 However, wander on to the site and you are struck by the size of the Abbey both in spread and height.   That the area is grassed over hides up the places where once there were gardens – possibly originally  beside the refectory and west in the open ground beside the Abbot’s Guest House.

The Abbey is a complex affair that once had two main gates; one to the north west which still exists known as the Kentish gate and possibly another in the southeast  to Sussex.  What is most impressive is that the stone work must have been magnificent and although we could complain about the indulgence in religious opulence at least there must have been plenty of work for local stone masons.

Wandering around I was amazed by a tree that I thought was growing outside the ruins but when examined I discovered that its roots were well entwined in the wall behind the high altar.  Quite odd really.  It was a nice place for a family picnic as one family had already found. 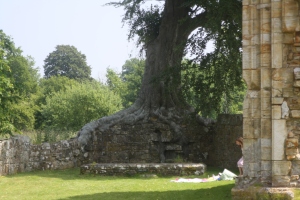 I grow where I can

Wander but be careful – the religious rabbits have excavated and left scuffings and diggings all over.   Obvious signs are bunny poo and the sudden ankle wrenching dip into a hole.

I am a writer, poet and artist and I like cats as companions and pets. I am a little ancient (old?)
View all posts by jpuss23 →
This entry was posted in Uncategorized and tagged Bayham Abbey, casual walking, Kent, Lamberhurst, Sussex walking, villages. Bookmark the permalink.